Kamen Rider Geats (仮面ライダーギーツ, Kamen Raidā Gītsu) is an upcoming Japanese Tokusatsu drama in Toei Company's Kamen Rider Series. It is the fourth series to debut in the Reiwa Era and the thirty-third overall.[3] The series is scheduled to premiere on September 4, 2022, joining Avataro Sentai Donbrothers in the Super Hero Time lineup after the finale of Kamen Rider Revice.

The series catchphrase is This game ― The winner of the end is me (このゲーム―最後に勝つは俺オレだ, Kono Gēmu ― Saigo ni Katsu wa Ore da) 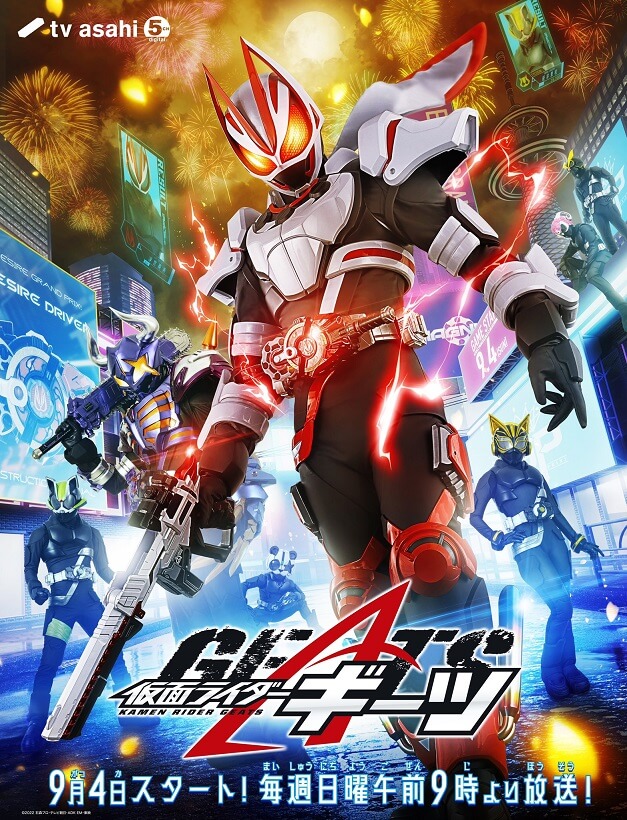 Geats was influenced by battle royale games such as Fortnite and Apex Legends to appeal for their target audience.[4]

Toei Company confirmed and filed the trademark for Geats on May 31, 2022.[3] On June 26, 2022, the copyright trademark updated to reveal the official title card of the show.[5] Advance screenings of Kamen Rider Revice: Battle Familia revealed a September 4, 2022 premiere date for Geats along with a short story teaser.

Congratulations! As a result of rigorous judging, you have been selected. From now on you will be a "Kamen Rider".

The "Desire Grand Prix" is a game of survival in which players must protect the peace of the city from the "Jamato", an unknown entity that attacks people, and survive to the end.

The winner will be given "the right to make their ideal world come true". The greatest game awaits you to save people and and make your own hopes come true. Welcome to the "Desire Grand Prix".[7]

Join us at: TokuFun Premium to watch it now!!